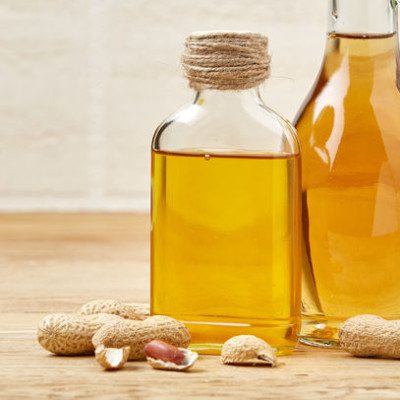 What is Peanut Oil?

Peanut oil is a liquid fat obtained from pressed peanuts seeds. It is composed of 80% unsaturated (oleic acid and linoleic acid) fatty acids and 20% in saturated (palmitic) fatty acids.1

It has a pale yellow color and a nut-like flavor that accentuates the flavor of savory foods. Its high smoke point (229°C/462°F) makes it suitable for deep frying and baking.1 Three types of peanut oil are available commercially:2

Peanuts (Arachis hypogaea L.) domestication is attributed to South America. It was then carried to Africa from Brazil by explorers and later to North America by slave traders. Today, China, India, U.S, Nigeria and Indonesia are the main producers of peanuts. A large part of the peanut crop is used whole or for the production of peanut butter in the U.S.1

Allergies to peanuts is a common health and is caused by a protein component in the nut. Refined peanut oil doesn’t pose allergy risk. However, crude oil was reported to impart allergic reactions in some consumers.2

Peanut oil can be commercially obtained through the following process:4

Peanut oil can be used in several baking systems such as cakes, cookies, muffins and breads. It’s most complimentary to savory and nuts-containing baked goods. Its use, however, is limited due to its high price.1,2

Margarines and shortenings made with peanut oil are used in various baking applications and can replace butter or shortenings in many formulations.1,2

Highly refined peanut oil is considered GRAS by the FDA. In the European Union, peanut and peanut derivatives by the  EC Commission Regulation 1169/2011.5,6