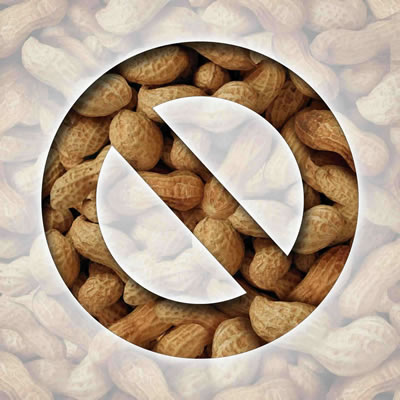 Peanuts are one of the top 8 allergens common in the food industry.

What is a Peanut Allergy?

Peanut allergies are the third most common food allergy in the United States, and is also one of the most dangerous. Evidence suggests an estimated 80% of all fatal or near fatal allergic reactions are due to peanuts. Additionally, the number of children with peanut allergies rose from 0.2-1.4% in the U.S. from 1997 to 2008. As a result, peanut allergies are frequently in the media. Peanut allergies are outgrown by children about 20% of the time by age six. Most people allergic to peanuts do not need to avoid other types of nuts and legumes, but some cross reactivity occurs.

Allergic reactions of peanuts are caused by immunoglobulin production in the body. Immunoglobulin production triggers the immune system to try and expel peanut proteins from the body and increases in histamine levels. This response causes the symptoms associated with peanut allergens. Symptoms commonly include hives, rash, sweating, and swelling of the lips and mouth. Peanut allergies can also lead to vomiting and gastrointestinal discomfort. In several cases, anaphylaxis can occur. As a result medical doctors recommend that anyone with peanut allergies carry an epinephrine dose just in case peanuts are accidentally ingested. Most of these reactions are only caused by ingestion of peanuts, though in some particularly sensitive individuals reactions can occur just by being near the cooking of peanuts, contact with peanut oils or even small amounts of peanuts cross contaminating a product.

There is no known cure for peanut allergies, so an exclusion diet is the primary way to avoid severe allergic reactions. The Food Allergen Labeling and Consumer Protection Act make this easier. All packaged products are required to clearly label if they contain peanuts in their product. Many manufacturers even warn that their product was made on the same line as a peanut product, though it is not required. This has lead to many factories choosing to specialize in peanut products, or not make them at all. Additionally, there are many lotions and creams that involve peanut oils that should be avoided by those who are sensitive to peanuts.

There have been many strides in recent history towards finding a cure to peanut allergies. Several studies have been conducted with introducing children with known peanut allergies to extremely small but increasing amounts of peanut protein daily. These have shown to be effective in desensitizing reactions to peanuts. Additionally, several bakeries and manufacturers have shown interest in an allergen free peanut created at North Carolina Agricultural and Technical School. This peanut is shown to have the same properties and flavor as regular peanuts, but even those most sensitive of individuals showed no reaction to these peanuts