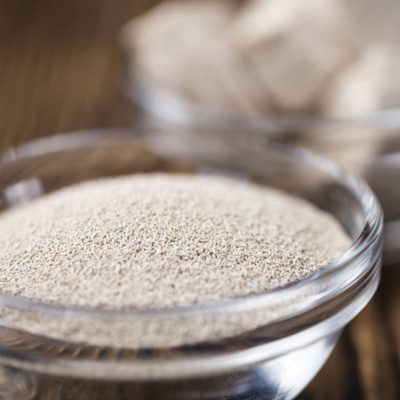 Osmotolerant yeasts are strains capable of surviving and growing in high osmotic concentrations. High sugar or salt concentrations can reduce the availability of water, thus impeding regular yeast fermentation and growth. Examples of doughs that can benefit from osmotolerant Saccharomyces cerevisiae yeast include donuts, brioche and bread rolls.1

Osmotolerant yeast can be commercially found as:

Improving osmotolerance of yeasts relies on ways for accumulating osmoprotectants within yeast cells. Osmoprotectant salts are typically added during the later steps of dry yeast manufacture to improve its osmotolerance although can lower biomass yields.

Similar to regular yeast, osmotolerant yeast can perform these functions in rich doughs:1

Generally, S. cerevisiae yeast is a good source of vitamins D and B as well as minerals such as potassium and zinc. These nutrients are associated with health benefits like lowering cholesterol, and managing neurological and cardiovascular disorders.

Commercial osmotolerant dry yeast is obtained through the following process:3

Osmotolerant yeast can perform well at: 2

Considerations when working with osmotolerant yeast: 4

Osmotolerant yeast can be substituted through the following guidelines:2

In the EU, the production of organic yeast is regulated by the EU Commission 1254/2008.6