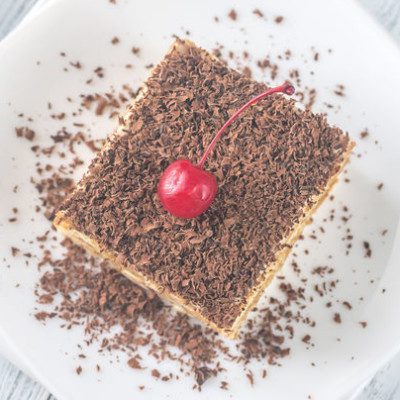 What Are Maraschino Cherries?

Maraschino cherries are cherries that have been preserved, colored and intensely sweetened. They are typically packed in marasca liqueur and flavored with almond or mint oils. These cherries are popular toppings for ice creams and cocktails as well as garnishings for cakes, cookies, cupcakes and pastries.1

The earliest recorded production of maraschino cherries was in the Dalmatian region of Croatia. They were made by soaking cherries in salt water followed by preserving in a liqueur made from the same cherries. This recipe spread throughout Europe and was a favorite of the royals. The cherries arrived in the US around the 1800s.

The modern process was developed by Professor Ernest H. Wiegand of Oregon State University. They are typically made with Royal Ann cherries or other white cultivars varieties.2

Maraschino cherries are typically used in baked goods for:

The nutritional value of 100 grams of maraschino cherries canned and drained is:

These cherries are high in sugar. Most of the fruit’s vitamins are lost during brining and bleaching.

Maraschino cherries are produced through the following commercial process:

These cherries are commonly used as a garnish in drinks, ice cream sundaes and embellishment in decorated cakes. They can also be used in cookies, muffins and cold cake fillings such as black forest cakes  and as a topping  in pineapple upsidedown cake.