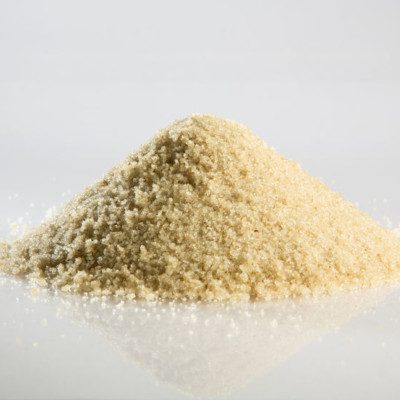 Fonio, one of many types of grains and pseudocereals referred to as ancient grains, has West African origins. It is touted for its nutritional profile and lack of gluten, which makes it an attractive baking ingredient, particularly for breads and snacks. However, some experts say more research is needed to substantiate those claims.

Fonio is a term applied to two different plant seeds Digitaria exilis Stapf and D. iburua Stapf, which are also known as acha and iburu. These sand-grain sized seeds are also called fundi, findi, hungry rice, and Asian millet.1 These are annual millets.

The plant looks like a grass and is cultivated in a dry area between the Sahara Desert and Africa’s savannas and forests known as the Sahel. It can be found in Senegal, Mali, Burkina Faso, Benin, and Nigeria, and other West African nations – areas in which other cereal crops are unable to be grown. It thrives in the climate despite poor sandy soil and low rainfall.2, 3

Fonio is used regionally as a flour, porridge and in traditional medicines as well. It has been difficult to scale up production beyond African markets, say exporters, because the seeds are so small and difficult to hull; however, a machine for husking the grain was developed in the mid- ’90s.4, 3, 2

Consumption outside the region is limited, but work is underway to increase production and create a supply chain such that it can be commercially sold outside Senegal and Mali.5 It can be used in baked goods, including bread, biscuits, cookies, and related products and it is being pushed as an export to satisfy consumer demand for novel, whole, ancient grains.1

Those promoting fonio claim it has an exceptional nutritional profile. It is purported to be gluten-free with four times the protein, three times the fiber and nearly twice the iron of brown rice. Additionally, it has a low glycemic index. These attributes make the ingredient prime for wide use in commercial baking and snack food production.4, 2

However, other researchers contend more rigorous scientific investigations are needed to support these dietary and nutrition claims—particularly as regards the fiber and phytonutrient content of fonio—as well as to gather information on its sensory attributes that can be used to develop and increase consumer acceptance and produce value-added products. This includes evaluating products in which fonio flour is combined with refined grain flours.1

The grain has and is being investigated as a potential ingredient in different types of baked goods. The starch is molecularly similar, for example, to teff. Its use in non-wheat breads—including those made with sprouted soybean flours, rice, and sorghum—and in sourdough breads have also been explored.1

Cakes, cookies, and other snack foods have also been reported as having been successfully made with fonio. Cookies, for example, have been made with fonio, sorghum, and pearl millet flours. It could also be incorporated in breakfast cereals, pasta, and crackers.1

Fonio flour is being milled with efforts focused on commercialization in the United States and Italy.4 Several large global food manufacturers have said they intend to incorporate the ingredient into their lines of baked goods and snack products.5

Zachary Golper, the chef and owner of Bien Cuit, a New York bakery, uses the grain in bread, calling its texture comparable to “fluffy sand” and says it is similar in taste to popcorn, but with a nuttier flavor. He used the grain in a heritage baking class at the Bread Bakers Guild of America conference.4

The United States Food and Drug Administration allows whole grain health claims to be made for products meeting specific guidelines. Its Whole Grain Label Statement guidance, released in 2006, states “Cereal grains that consist of the intact, ground, cracked or flaked caryopsis, whose principal anatomical components—the starchy endosperm, germ and bran—are present in the same relative proportions as they exist in the intact caryopsis— should be considered a whole grain food.”6, 7