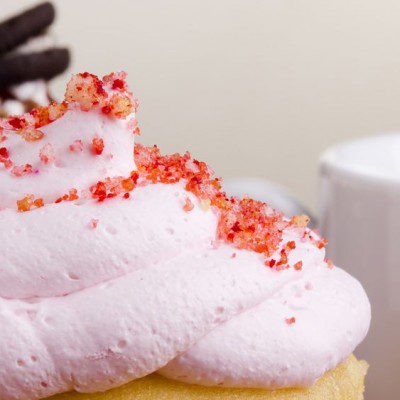 Buttercream is a butter-based frosting or icing, typically used on cakes and cupcakes as a coating, layering or decorating cream. Classic buttercream is made from creamed butter and confectioners sugar.

Flavoring and coloring are added to impart characteristic flavors and colors. ¹,² Various types of buttercream have been developed, such as: ¹,²

The practice of frosting cakes began in the 17th Century. Although, they were made with egg whites and sugar.³ Buttercream’s usage as a frosting started in the 20th Century to replace traditional boiled icings.

Today, buttercream is one of the most commonly used frostings or icings in baking around the world.¹,²

Buttercream has several uses in baked goods mainly cakes, such as: ¹,²

The nutritional value of a commercial buttercream per 100 g can be seen in the following table:4

Buttercream frosting is a high caloric food due to its high sugar and saturated fat content. It provides 429 kcal per 100 g.4

Health concerns associated with high cholesterol and high saturated fats such as heart disease risk and obesity, should be considered when consuming excessive amounts of buttercream.

Some considerations when coloring or flavoring buttercreams:¹,²

The FDA doesn’t have a particular section dedicated to buttercream. However, the regulation status of its core ingredients butter and sugar are established as GRAS.

In the EU, buttercream is regulated by the EU Commission No 445/2007 that establishes the rules for dairy products.5