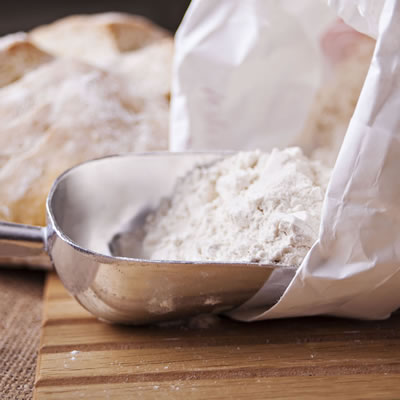 What is Bread Flour?

Bread flour is a high-protein patent flour specifically milled for yeasted breads. Unlike whole wheat flour which milled from the whole wheat kernel, bread flour is made from just the protein-rich endosperm of hard red spring or hard red winter varieties.

The protein component, mainly gluten, is an essential constituent of raised wheat bread allowing its expansion after leavening.1

African-American inventor Joseph Lee patented bread flour in 1902 in Boston. Even earlier than this, however, Hovis flour was created in the UK in 1886, when miller Richard Smith discovered a way to separate wheat germ from the flour, cooking it and adding it back into the flour while preventing fermentation which would spoil the flour. Gold Medal introduced what was called “High Protein Flour” in the 1920s.

Bread flour is best used where strong gluten development and yeast-generated flavors are  needed. The higher protein content of bread flour (11.5 to 13.5%) is responsible for the characteristic attributes such as texture, appearance, and hard crust.2

There are many different types of bread flours on the market, all varying in protein level, as well as blend. Some may have a 50-50 blend of hard winter and spring wheat, with spring wheat being typically more expensive but better in protein quality. Some even have hard white wheat blended into the mix. The flour can be bleached or unbleached depending on the desired characteristics of the final product. Most flour brands have bread flour available.

Bread flour is produced for commercial bakeries at a flour mill, mostly from hard red wheat. The flour is milled according to customer specifications to ensure the desired amount of proteins and particle size. Gluten proteins reside in the endosperm.

Bread flour is a significant source of nutrition. It offers energy, protein and nutrients that are either inherent or added during processing. Bread flour is low in cholesterol and saturated fatty acids.

Flour processing can have a significant impact not only on its functionality but also its nutritional value. For example, high extraction rate (yield) bread flours contain high concentrations of bran and germ, so it has a high nutritional value. One problem with wheat germ is its negative effect on lipid oxidation and off flavor development, especially if stored for a long time.

Bread flour is used for yeast bread. The protein level in bread flour is 12-14% compared to all-purpose flour’s average of 11%.3

Bread protein and water mix to form an elastic network known as gluten. The two proteins of importance are gliadin and glutenin. Glutenin is responsible for the elasticity of the dough while gliadin is responsible for dough extensibility.3 This makes gluten elastic and plastic, allowing it to expand when gas is formed during fermentation. Flour with a higher protein creates bread with more volume and structure while maintaining a soft crumb.

Flour is listed under the Code of Federal Regulations (21 CFR 137.105). There is no standard of identity for bread flour currently listed by the FDA.4