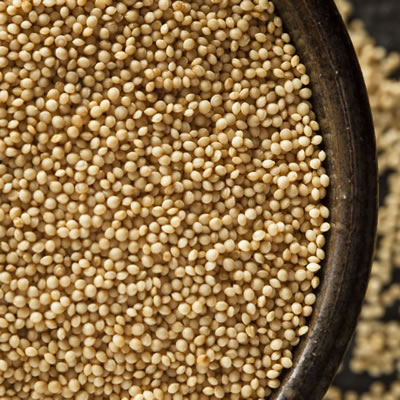 What is Amaranth Flour?

Amaranth flour is a specialty flour derived from the amaranth, a plant native to Mesoamerica that’s cultivated throughout North and South America.

The flour of this small pseudocereal is typically used in specialty, multigrain baking mixes. It can also be used in flat and leavened breads including gluten-free formulations.1

The seed of a plant native to Mesoamerica and cultivated throughout North and South America, grain amaranth is touted for its high nutritional value. It is also known as “prince’s feather.” The flour is traditionally used to make tortillas, pastries and tamales. Some of these items were made and eaten by the Aztecs and other cultures as part of their religious observances.2

The most common cultivar is A. hypochondriacus. In the United States, consumption is reportedly hampered by lagging research and a lack of a stable, uniform supply.3  “It will probably remain a specialty market rather than a mass market for quite some time,” Octavio Paredes-Lopez said in Amaranth Biology, Chemistry, and Technology.1

Grain amaranth can be used in breakfast foods, bread, multigrain crackers, and pancake mixes. Experts contend more research and work is needed in product development, commercialization and marketing for it to be more widely used.4

Amaranth flour has a protein content ranging between 14.5 and 17.8 percent. It also contains high amounts of lysine.6

Milling is difficult because of its smaller structure. One amaranth milling experiment involved passing it through a barley pearler. The flour comes in several forms: whole, high and low bran.1

Amaranth flour is one of several specialty flours available for use as an ingredient. However, special care is needed for it to be successfully incorporated into a formula, according to Michael Suas and Frank Wing in Advanced Bread and Pastry: a Professional Approach. The amount used in bread or other baked goods should be monitored and tested. Using roughly 20 percent of the total flour volume is suggested as a starting point, but “only a good deal of experimentation … will determine the exact amount to use to get the best balance between optimum dough characteristics, desired appearance, and flavor for the finished product.”5

Amaranth flour needs to be incorporated into dough during the pre-ferment stage as it is at this point that it and other specialty flours is changed by yeast. It is also the stage during which a weak flour will weaken more, which Suas and Wing say is a desirable reaction. “This will create dough with a higher-quality gluten structure and breads with nicer appearance and superior volume.”5

Although recommended for use in quantities of up to 15 percent, which reportedly do not affect the physical and sensory qualities of bread, varying amounts of amaranth flour are suggested by different research studies. Some found breads with 10 to 16 percent amaranth flour had little effect on bread quality, while 10 percent resulted in darker bread. Bread had a significant softer crumb texture in comparison with the control loaves.4,1

A baker needs to understand how amaranth flour works and adjust the baking process accordingly, conclude Suas and Wing. Modifications will be needed through the process to achieve a good loaf of bread.5

In May 1993, the United States Food and Drug Administration determined amaranth was a traditional food. Thus, it is not required to have generally recognized as safe status.1