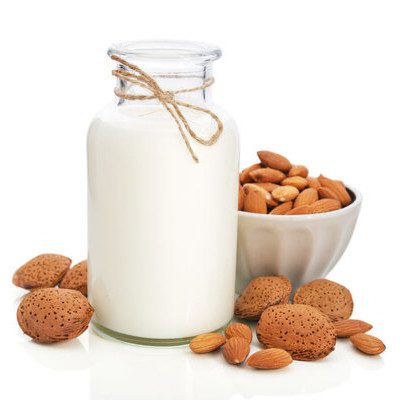 What is Almond Milk?

Almond milk is a plant-based liquid commonly used to substitute animal-based milk. It is made from almond nut seed through a mechanical process. Almond milk is gluten- and lactose-free, and has a characteristic nutty flavor and mildly sweet taste. It is used in:1,2

This plant-based milk has been known since the 13th century, according to ancient references in Baghdadi and Egyptian cookbooks. Recently, its popularity increased significantly due to health, environmental and ethical consumer concerns. Currently, it is a very  popular plant-based milk substitute in the United States and Europe.3

Typical nutritional value of a commercial almond milk per 100 mL:1

This milk provides 55 – 55.90 kcal per 100 mL. It is naturally gluten-free. However, it may cause common nut-allergys. Other benefits include its antioxidant and prebiotic properties, low-fat and low caloric value.1

The following processes are used to produce almond milk industrially :1,3

Almond milk is commonly used to substitute cow’s milk in baked products such as muffins, cookies, cakes and breads.1 Custards are not good candidates for almond milk substitution due to lack of structural support for egg coagulation.2

Typically, cow milk can be substituted 1:1 with almond milk, producing similar results in most baked products.1,3

Some common characteristics of almond milk baked goods are:4

Some considerations when using almond milk in baked goods:

Almond milk is considered safe by the FDA when consumed by people without a nut-based allergy. It’s still debatable whether plant-based dairy alternatives can use terms such as: milk, cheese or yogurt due to the difference in nutritional value between these products.4

In the EU, almond milk is considered safe when consumed by people without a nut-based allergy. A similar debate is going on in Europe whether plant-based products should use terms reserved for dairy  according to the EU Commission No 1308/2013.5