Reducing agents are a type of dough conditioner used to reduce mix time and improve extensibility. They are used in bread to increase bakery throughput and to adjust for flour variation and in a number of other yeast and chemically leavened applications.

How do reducing agents work?

During mixing, the gluten in the flour is stretched and pulled apart so that it can be reformed during proofing and baking to provide the needed strength and structure. Reducing agents act like mixing to reversibly break down gluten so that once they have been used up the gluten reforms. This mechanism is the opposite of oxidizing agents, which build up gluten. Reducing and oxidizing agents can be used separately, or a reducing agent can be used with a slow oxidizing agent to increase gluten breakdown early in the process and gluten reformation later in the process.

When reducing agents are used with fast oxidizing agents (like iodate or azodicarbonamide), they counteract each other. Bread dough requires a combination of:

These depend mostly on:

Frozen bread dough is a special case where short mix time is especially important because it helps improve yeast stability. Extensibility is important in other yeast and chemically leavened applications including pizza, tortillas, cookies, saltines, and other crackers. Reducing agents decrease the elasticity that can cause shrinkage or curling after these products are formed.

What are the characteristics?

The characteristics of reducing agents depends on the source

Protein-based reducing agents include cysteine, glutathione, and yeast. Cysteine is the most commonly used reducing agent in bread. It is an amino acid that is usually produced synthetically as L-cysteine hydrochloride, is usually added at the mixer, and acts quickly. Glutathione is a peptide that contains cysteine but is not generally available in its pure form. It functions similarly to L-cysteine but is potentially more effective because it can react more times. Yeast is a natural source of glutathione. Special non-leavening yeasts are used as reducing agents in the same applications as L-cysteine.

Sulfites are commonly used reducing agents in cookies and crackers. Their active ingredient is the bisulfite ion that is obtained from sulfur dioxide or from one of its salts, such as sodium bisulfite. Sulfites destroy the vitamin thiamine, are inhibitory to yeast, cause sensitivity reactions in some people, and require special label declarations if used in the U.S. at levels in the finished product above 10 parts per million.

Other acids that have been suggested as reducing agents, but are not commonly used, include sorbic acid and fumaric acid. They are part of a group of “activated double-bond compounds” and are more commonly used as preservatives. These acids are inhibitory to yeast and less economical than other synthetic reducing agents.

Proteases are used to decrease mix time and increase elasticity but are not reducing agents. They are natural enzymes that break down gluten irreversibly and must be used with careful attention to dose, time, and temperature to avoid over conversion.

Fermaid® dough relaxers are processed to maximize available glutathione—a naturally occurring yeast peptide that acts as a reducing agent. They function similarly to L-cysteine but with the added benefit of being label-friendly. For breads and rolls, they can be used to reduce the mix time required for high-strength flour or high water absorption. They give a dough that is smoother and easier to handle at the moulder, with good flow in the pan. Finished volume is high and uniform, with a fine, uniform internal structure.

Using Fermaid® dough relaxers to optimize mix time minimizes the effect of flour changes, improves machinability, and avoids both “bucky,” undermixed doughs and sticky, overmixed doughs. Fermaid® dough relaxers are available in versions for a range of products and applications. Those with lower glutathione levels are used at higher doses so that they also contribute flavor and crust color. Those with higher glutathione levels are used at lower doses to provide dough relaxation without contributing taste or flavor.

Learn more about it here.

Now that we’ve covered what dough reducers do, let’s look at how they do it.

Cysteine is unique among the protein amino acids because it has a sulfhydryl group at the end of the molecule. Cysteine is important to dough reduction chemistry because it occurs in the gluten protein from flour, in the tripeptide glutathione from yeast, and in free amino acid form as a synthetic reducing agent. 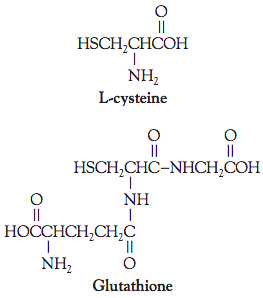 The significance of cysteine’s sulfhydryl group is that two of them from different proteins can be oxidized to one molecule of cystine, with the creation of a disulfide bond between them. When gluten molecules become linked (oxidized) during breadmaking, the dough strength increases but its extensibility decreases. During mixing, these linkages are broken mechanically to provide the extensibility needed for moulding. The process is reversible, and the gluten matrix reforms during the later stages of proofing and baking.

The disulfide bonds in gluten that are broken mechanically during mixing can also be broken chemically by a series of reactions with cysteine or glutathione known as disulfide interchange. The reactions are shown here, with R and R’ representing the two gluten molecules and with cysteine as the reducing agent: