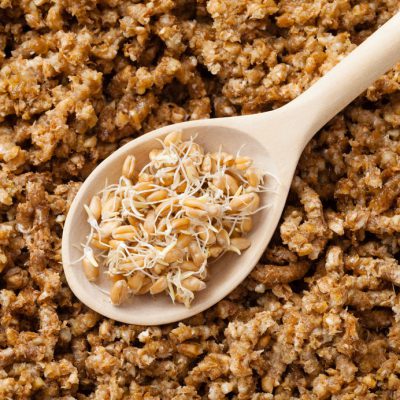 Bread made with sprouted grain is claimed as flourless bread.

What is Sprouted Grain Bread?

Sprouted flour or mash creates bread that has extra sweetness and flavor with a longer shelf life. These breads are popular because of their health benefits. They are a readily digestible product and are often made with less sugar than standard bakery products.

The production of the first sprouted grain breads is an ancient tradition. In the past, standard grain harvesting practices around the world involved leaving grain in the field after harvest. While waiting to be threshed (separating the seed from the shaft), the grain would absorb moisture.

Back in the 2nd century BC, a Jewish monastic group known as the Essenes developed the earliest recipes and techniques for sprouted grain breads.1

Sprouting occurs when grain seeds/kernels are soaked and rinsed. This activates a natural process called germination. Germination begins with water uptake by the grain seed (imbibition or long hydration process), and ends with the emergence of the embryonic axis, usually the radicle, through the structures surrounding it which causing the outer shell of the grain to crack.2

The resulting sprouted grain is then ready for milling and baking applications. Due to its high enzymatic activity, the increased amount of simple sugars can be consumed by yeast during fermentation. This creates increased bread volume.

There are several benefits regarding sprouted bakery products:

The process begins with sprouting the grains, under closely monitored temperature and moisture conditions, to start the germination process . This germination is achieved by steeping/soaking grains with water to raise their moisture level. This step usually takes 24-48 hours.

Cereal grains, such as wheat, millet, barley, spelt, or a mix of these, are most commonly used. However, sometimes legumes such as soybeans or lentils are used for sprouts as well.

Unlike 100% whole wheat flour that often leaves bread with a bitter taste, sprouted flour introduces a unique flavor and sweetness. In most cases, little to no sugar is used in sprouted grain bread products.

Some sprouted grain flours have double the shelf life of conventional whole wheat flour. However, storage is still needed in a dry, cool place.5

There are currently no FDA requirements on sprouting or what constitutes a “sprout.” However, the agency does provide guidelines to reduce the risk of contamination, including production, treatment, condition, storage and transportation.6