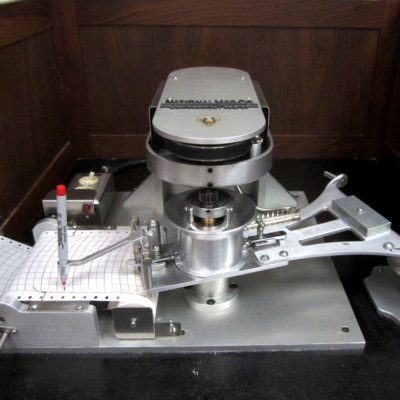 The mixograph is a dough testing equipment used to assess the baking quality of flours from soft, hard and durum wheat. It provides information on the mixing and absorption characteristics of flour.

The mixograph helps millers, bakers and plant breeders to:

The mixograph was developed in the U.S. by two scientists, Swanson and Working, in the 1930s. The mechanics remains the same today, but improvements in its design were made the following decades to improve its reliability.

The mixograph is a recording dough pin mixer that rapidly develops a dough sample. It measures and records resistance of a dough to mixing. It consists of small dough mixer constructed in such a manner that the force required (torque) to turn a head over a static bowl containing dough is measured and recorded as a graphical curve called mixogram.1,2

As the gluten-forming proteins hydrate and coalesce, they form gluten strands which bind together to form an elastic matrix. During measurement, the force increases to a maximum and then decreases as the dough is overmixed.

Two different sizes of mixographs are commercially available: 10 g and 35 g. The machine can be hooked up to a computer running a software program to provide detailed and accurate mixing data.2

A different absorption can be determined by comparing curve characteristics with other mixograms having an “optimum” absorption.