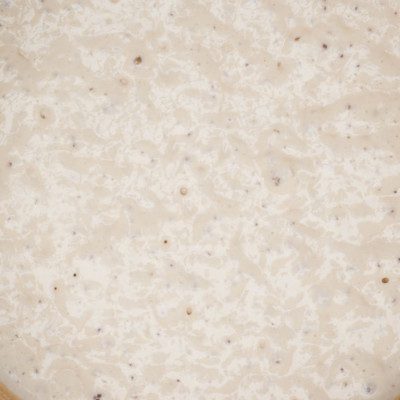 Levain is a type of preferment which matures slowly prior to its addition to bread dough. In the United States, the terms ‘sourdough’ and ‘levain’ are often used interchangeably, which is not the case in Europe. Both terms refer to a similar composition and fermentation process which give bread its unique taste, flavor and texture.

Levain is typically prepared from a flour and water mixture which ferment using the flour’s natural yeast and other microorganisms. The resulting liquid, paste or dough Is refreshed or fed at regular intervals to help the microorganisms ferment and multiply.2,3,4

Levain or sourdough can be perpetuated for months, years, decades or even centuries. The Boudin bakery in San Francisco is known to have used the same starter for more than 160 years.1

Sourdough starters may have originated in the Fertile Crescent, mainly Egypt where small pieces of  dough were preserved to help with the next day’s bake. Bakers who had lighter bread became better known for their starters, and were encouraged to keep them active.4

Anecdotal records indicate that since the same yeast is involved in beer and bread fermentation, levain preparation may have been initiated by collecting the foam floating on top of brewing beer and added to flour-water mixes.

Modern levain preparation methods are believed to have been developed in France. In 1849 and during the California Gold Rush in the follow decade, French bakers brought this technique with them to the U.S. The new preferment or sourdough contains yeast (Candida milleri) and bacteria (Lactobacillus strain that was later named Lactobacillus sanfranciscensis). Sourdough (white) bread made with this preferment has distinguished tangy, sour and complex flavor.5

How is levain made?

Due to its unique method of preparation, no two levain preparations are exactly the same.

A levain can be developed as stiff, liquid or rye. Often for stiff and liquid, only one of these is prepared and can easily be altered into the other depending on the baker’s requirements to achieve the desired results.

When mixed together, flour and water activates the amylase enzymes so that they can break down starch into maltose. The latter is then broken down into glucose, an ideal yeast food. The feeding yeast produces carbon dioxide responsible for  the starter rise. Lactobacilli, also produced in this process, create lactic acid that gives sourdough its distinct tangy flavor.

*Two feedings. Each 12 hours apart. Mix well and let it sit at 23–27°C to develop. On day 6 the levain should be ready for use. A feeding schedule like days three four and five can be followed hereafter to keep the levain fed and ready for use.

* Two feedings. Each 12 hours apart. Mix well and let it sit at 24–27°C to develop. On day 6 the levain should be ready for use. A feeding schedule like days three four and five can be followed hereafter to keep the levain fed and ready for use.

Newer versions of levain are currently available which use commercial yeast and require only 24 hours to develop prior to addition to bread.

Determining the end-point of levain and other preferments is often decided by the baker based on few observations:

Levain fermentation is preferred for its contribution to the baking of specialty breads with favorable qualities such as:

Chlorinated water can have a negative impact on the starter culture due to inhibition of the microorganisms metabolism. Filtered water should be used to mitigate this problem.

Occasionally, ingredients such as honey, grapes and grated onions and potato water are added to the initial mix to improve nutrients availability to the yeast. Bleached flour should be avoided due to its negative impact on culture development. Salt may be added to the culture, at less than 0.1% to slow down but not hinder the rate of yeast and microorganisms activity.

Rye flour is often used in the initial feeding stages even with white cultures. Its high content of  nutrients and fermentable sugars help improve culture development. Similarly, wheat bran, rich in nutrients, can be added to preferments often after overnight soaking.

Starter consistency can have a significant impact on the bread quality. Wet starters have the consistency of a batter, are more active and can mix quickly into the bread dough. Dry or dough-like starters are slower but can be preserved, under refrigeration, for longer periods.