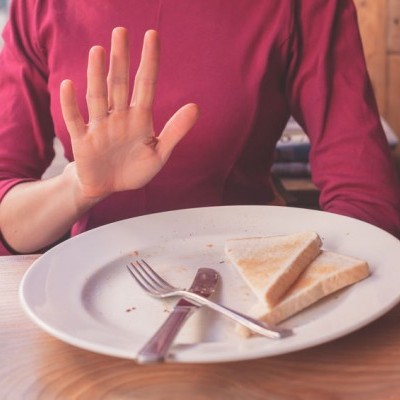 People who are gluten sensitivities avoid wheat, rye and barley.

What is Gluten Sensitivity?

Eating products that contain gluten creates physical problems for those with gluten sensitivity. Gluten is a protein found in wheat, rye and barley.

Wheat allergy:
Wheat allergy is a type 1, IgE-mediated hypersensitivity response to nongluten proteins, the albumins and glubulins, within wheat. It doesn’t represent a reaction to gluten itself.

Celiac disease:
Celiac disease is an autoimmune disorder in which the immune system attacks the lining of the small intestine after someone who is genetically susceptible to the disorder ingests gluten from wheat, rye or barley. The damaged lining of the small intestine limits the ability of celiac disease patients to absorb nutrients and puts them at risk of other very serious health problems, including nutritional deficiencies, osteoporosis, growth retardation, infertility, miscarriages, short stature and intestinal cancers.2 The symptoms of CD include abdominal pain, diarrhea and bloating. The relationship between gluten and CD was established in 1940s.3 Approximately 1% of U.S. population is inflected with CD.4

Non-celiac gluten sensitivity:
Non-celiac gluten sensitivity (NCGS) is a diagnosis of exclusion. Patients who experience the celiac-like or wheat allergy-like GI symptoms, as well as certain extra-intestinal symptoms, such as fatigue, cognitive difficulties, or mood disturbance, after ingesting foods that contain wheat, rye or barley, may have NCGS.5 One explanation for NCGS is that exposure to the offending grains somehow triggers acute systemic immune activation, rather than a strictly localized intestinal immune response.5 To date, no biomarkers have been identified for this condition. It is estimated that 1% of the American population are affected with NCGS, which is the same prevalence as celiac disease.5  Common symptoms of NCGS include fatigue, foggy mind, depression, attention deficit hyperactivity disorder-like behavior, abdominal pain, bloating, diarrhea, constipation, headaches and bone or joint pain.

The current treatment for gluten sensitivity is lifelong adherence to a strict gluten-free diet (GFD).

There are four types of cereal protein found in gluten according to their solubility:

The prolamin in wheat is named gliadin. The glutelin of wheat is named glutenin. Glutenin and gliadin are wheat storage protein. They together form gluten, which contributes to the formation of dough.6

Gliadin is known as the toxic protein to those with celiac disease.4 Glutenin has also been found to be intolerable as well. The prolamins in rye (secalin) and barley (hordein) are also harmful to celiac disease patients. Rice and corn prolamin, orzenin and zein respectively, are not damaging.4 The avenin prolamin in oats is still under contravention for safety of consumption. Therefore, a gluten-free diets means not eating foods that contain wheat, rye and barley.4

NCGS patients who followed a diet that excluded wheat and related cereals for six months were able to normalize their levels of immune activation and intestinal cell damage markers.5 These changes were associated with significant improvement in both intestinal and non-intestinal symptoms.

On August 2, 2013, FDA issued a final rule defining “gluten-free” for food labeling.7 The final rule defines “gluten-free” as meaning that the food either is inherently gluten free; or does not contain an ingredient that is: (1) a gluten-containing grain (2) derived from a gluten-containing grain that has not been processed to remove gluten (3) derived from a gluten-containing grain that has been processed to remove gluten (e.g., wheat starch), if the use of that ingredient results in the presence of 20 parts per million (ppm) or more gluten in the food.7 Also, any unavoidable presence of gluten in the food must be less than 20 ppm.7