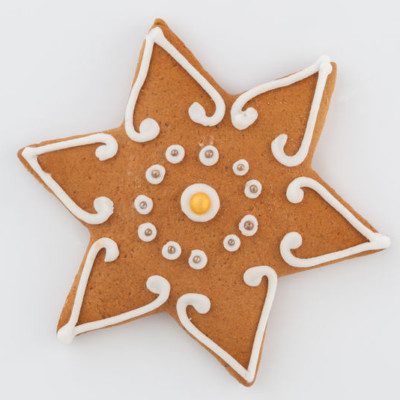 Gingerbread is an umbrella term used to describe many different sweet breads, cakes, and/or cookies made using ginger and sweeteners such as honey, treacle, or molasses.

Since antiquity, gingerbread has evolved from a flat slab bread into fluffy cake, chewy cookies, and as a foundation for culinary showpieces. It is related to many other spiced cakes, such as:

The first recipe for a honey and spice cake was recorded in 2400 BC in ancient Greece. Other regions, including China and Europe, also formulated and recorded recipes for gingerbreads. However, these cakes were very different from the contemporary baked good known as gingerbread. These cakes were flat and chewy, similar to lebkuchen, a close relative of gingerbread.¹

Gingerbread was a luxury in Medieval Europe as most of the ingredients were imported sugars and spices. So prized were the breads that towns had their own recipes and guilds also formed. The sweet became strongly associated with religious holidays, including Christmas and Easter.

The English version relied on stale white bread to which cinnamon, ginger, “licoras” and aniseed were mixed along with sugar and claret. Sweetener use and preferences evolved with bakers eventually opting for treacle and/or molasses. Originally, when leavened, a sourdough-like starter was used. The dough was typically formed in elaborate molds and finished with gold leaf.⁵

When gingerbread came to the Americas, it was equally prized. However, a softer, cake-like gingerbread was preferred. One recipe—traced to George Washington’s mother, Mary Ball Washington—came to be known as Gingerbread Lafayette as it had been served to the Marquis de Lafayette on a visit to Virginia.¹

Today, gingerbread items are traditionally made and enjoyed between Thanksgiving and New Year in North America. During this period gingerbread-inspired holiday treats abound and can even be found as coffee flavoring, sweet peanut-butter-substitute spreads, or ice cream.

“This is a favourite article with many nations,” stated George Read in his 1854 treatise on the topic.³ Breads made with barley or rye were sweetened with honey or sugar and spices were added. In an ancient French version, “when baked, the top was washed over with the scum taken off sugar in refining houses.

“The taste for this sort of bread appears to have been univesal [sic], but carried to the most excess in Holland, where it is considered the best sort is made.”

John Kirkland’s 1907 commercial baking series explains the chemistry of gingerbread making in detail.⁴ Yeast was not used in the sweet-laden cakes since “the yeast plant cannot thrive and ferment properly. … It was long ago discovered, however, that if pearlash was added to the treacle or other syrup material before putting into the flour, the doughs so made, after keeping for a time, which may vary from two days to nearly twelve months, would be partly aerated, and turn out good gingerbreads or honey cakes as the case might be. This is the basis of the Dutch and German methods of honey-cake making, and also that of gingerbread production in this country.”

Advances in technology and the wider availability of commercially-refined ingredients changed the way foods, including gingerbread, were made.⁷

Gingerbread can be enjoyed in many forms, but cookies are one popular item.

Recipes for commercial gingerbread vary widely. Yet from stiff paste used to make square cakes to modern cookies, all are based around spices and sweetener. Ginger has been incorporated in powdered, crystallized, or even fresh form. A wide variety of sweeteners have been employed, beginning with honey. Molasses, brown sugar, and golden syrup have been used to make cakes and cookies ranging in color from dark to golden brown.²

Spices have variously included coriander seed, caraway, cloves, rose water syrup, fennel seed, and aniseseed or even pepper. At some point, treacle was used and candied orange, lemon, citron and ginger were added to the base dough, which often was formed using some combination of potash, volatile salt and alum or acid.

A different recipe is needed for architectural baking with gingerbread. Stiff, unleavened gingerbread is required to construct houses and confectionery dioramas for the winter holidays. Typically, the dough is cut and shaped before it is baked. When leavening is present, the dough will spread while baking, which changes the shape and makes it difficult to construct displays as planned.⁶