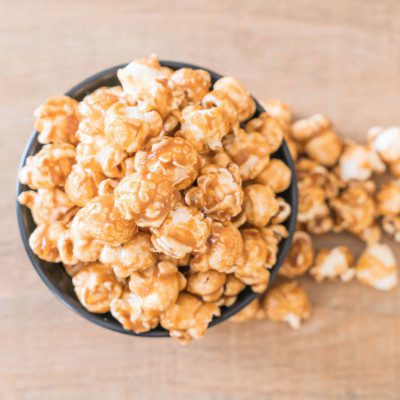 Caramelization is a complex group of reactions that take place when sugars, either dry or in concentrated aqueous solutions, are subjected to high temperatures to form unique brown colors and flavors in baked products and other food systems.

How does caramelization work?

Caramelization is a poorly understood series of pyrolysis reactions that occur in carbohydrates when exposed to high temperatures.  Most sugars can caramelize and the temperature necessary for caramelization varies with the type of sugars. Fructose, for example, requires an initial temperature of 150oC while maltose caramelizes at 180oC.

The mechanism of caramelization development involves many steps starting with carbohydrates (reducing mono- and di-saccharides) decomposition, dehydration and degradation, followed by the formation of small molecules, a lag phase and eventual condensation or polymerization to form  complex molecules of varying molecular weights.3 The exact type of products formed is dependent on the sugar chemistry as well as process conditions such as temperature, pH, water activity among others. Caramelization of sucrose, for example, can be divided into the following stages:

To impart desirable colors and flavors in bakery products, the caramelization process should be allowed to take place under controlled conditions to avoid the generation of excessively dark colors and bitter flavor compounds. Progress of caramelization reactions is monitored visually as well as analytically using various techniques such as:

Caramelization can occur in many systems other than baked products. Depending on the time and temperature, a wide range of colors can be generated from yellow and brown shades. Similarly, flavors obtained from caramelization reactions can vary from mild sweet caramelized to bitter and burning.

In addition to colors and flavors, changes in the sugar structure and the loss of water during caramelization can have a significant impact on the mechanical and barrier properties of carbohydrate-containing baked system.

Caramel can be used as a filling, topping, or as a glaze. Flan and custard cake varieties commonly have a thin glaze of caramel drizzled topically. Hardened caramel can also be used in decorating applications because of the molding properties before complete hardening.