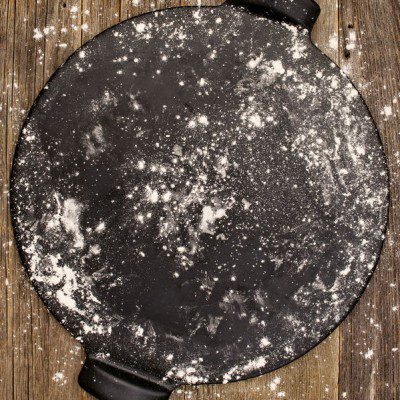 What is a Baking Stone?

A baking stone is a portable cooking surface used in baking. They may be made of ceramic, stone, tile, etc. The baking stone helps give bread and pizza a golden, crispy crust.

Baking stones were mass produced from transite, a hydraulically pressed cement-asbestos board, from the 1940s until 1985. Asbestos was discovered to be extremely hazardous to human health and it was banished in 1985.1 New materials were introduced after asbestos. A mixture of Portland cement or calcium silicate, mortar or mason sand, glass fibers, water and a plasticizer were used to produce baking stones in one patent.1 In another patent, the composition of the cured baking stone included Portland cement, fireclay, mullite, silica, glass fiber, water and a plasticizer.2

Baking stones are usually porous, absorbing any fluid which it comes into contact with. This results in crispy food. Baking stones have good thermal mass and high heat capacity. It is produced of material that is a poor heat conductor. Food is less likely to burn with a baking stone than when using metal or glass bakeware.

When designed for cooking pizzas, a baking stone is often referred to as a pizza stone. Using a pizza stone more or less mimics the effects of cooking a pizza in a masonry oven. The porous nature of the stone used also helps absorb moisture, resulting in a crispy crust.

To prevent fracturing of the stone by thermal shock, some bakers place the baking stone in a cold oven and do a long pre-heat, then allow it to cool down slowly inside the oven after switching it off. Some cooks recommend sprinkling corn meal, semolina, bread crumbs or rice flour on the baking stone to prevent the crust from sticking.

Baking stones will absorb detergent. Clean with a dry brush and then plain water. Some bakers suggest avoiding washing or oiling a stone since moisture can cause it to crack.3 Don’t put frozen pizzas on the stone to avoid thermal shock. Use only dough that is room temperature or warmer.3

To produce a crispy item, place the baking stone in the oven at least an hour before baking and turn the temperature way up to the maximum temperature which the oven can safely go. Let the stone get extremely hot before placing the bread on it. This may shorten the shelf life of stone.