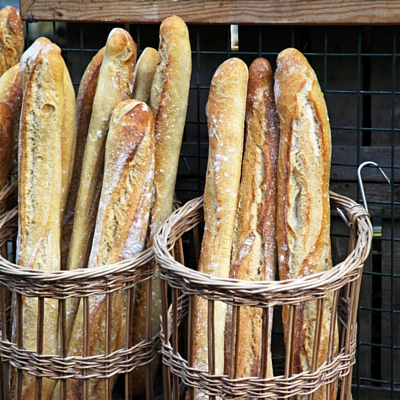 What is a Baguette?

A baguette is a long loaf of bread closely connected to France. It is essentially a lean, yeast-leavened bakery product made with four basic ingredients:

Other ingredients can be used at low levels depending on the process and finished product characteristics. Baguettes are characterized by a crisp crust and chewy texture inside. Typically, a baguette has a diameter of 5.0–7.6 cm (2–3 inches), and a length of 60–70 cm (2.0–2.4 feet).

The origins of the baguette are uncertain, but it is generally accepted that it was first made in Vienna as an adaptation of another type of bread. Baguettes then became popular when the French government mandated that bakers not be allowed to work before 4 a.m. making it impossible to make traditional round loaves in time for customers’ breakfast.

Subsequently, bakers had to bake the thinner shaped baguette that would bake faster for the breakfast rush. This switch was also facilitated with the development of new slow yeast fermentation techniques and the availability of new deck ovens which used steam injection  Over the years, the baguette became a symbol of France, with a revival in the 1990s.

How are baguettes made?

Traditional French baguettes are normally produced from a relatively lean formula that may or may not contain sugar or shortening. Most French baguette doughs are made with a pre-ferment such as poolish or a sponge which takes up to 10 hours prior to dough making.

A typical baguette formula, using a straight-dough process, looks like this:1,2

The weight of a baguette is usually a function of loaf length. The baguettes are usually made up about 46 cm (18 inches) long to produce a 1 pound (454 g) loaf, and 60 cm (24 inches) long to obtain a loaf of about 650–700 g. Baguettes have a high crust to crumb ratio. Therefore, they lose a high percentage of moisture during baking and cooling, and may over bake (dehydrate) easily.

Baguettes are classical products which are characterized by having a hard and crispy crust. A baguette with a soft crust is usually rendered as “stale” and is often rejected by the customer due to poor quality or lack of freshness.

Proper scoring is necessary for product authenticity. Such markings have become part of the traditional character of the baguette. The ‘traditional’ French baguette is given a fixed number of shallow cuts, largely following the length of the dough piece.3 The following is a good illustration of a proper scoring:

Baguette formulations containing no fat may require harder wheats with a higher protein content in the bread flour. This guarantees optimum gas retention properties in the dough. Weaker flours with lower percentages of protein may require the addition of improvers such as oxidizing agents and emulsifiers to improve machinability and add some strength during baking.

Baguette doughs produced on high speed lines or wholesale bakeries must be fully developed during mixing and kneading, and fermented slightly more than normal to withstand the mechanical stress during makeup operations.

Given the high level of hydration and lean formulation of baguettes, a gentle dough handling is required during makeup. Mechanical damage to gas cells during dividing and moulding should be minimized to preserve crumb structure in the finished product.