Inside the Yeast Cell: Active and Inactivated 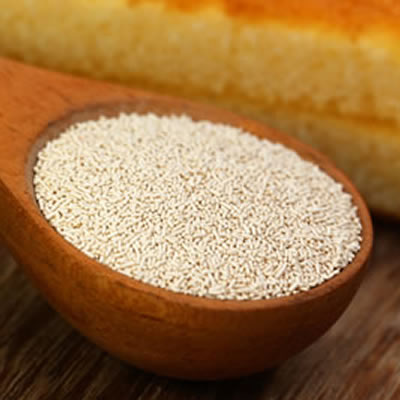 Dry yeast is a natural leavener used in bread products.

These little fungus cells have a lot going on. Yeast feeds on fermentable sugars in dough. As those break down, they produce carbon dioxide that is captured in the protein matrix, which makes the dough rise.

Yeast-produced alcohols, enzymes and acids also bring about dough maturation, stretching the protein as a result of the chemical reactions. Yeast enhances the dough in other ways as well, such as giving it a characteristic flavor.

And not all yeasts are created equal. There’s dry yeast (active, instant or rapid-rise), which usually needs rehydration; cake yeast, a very active form of yeast for smaller-sized bakeries; and cream yeast, a liquid form that is favored for high-volume dispensing and mixing equipment for industrial bakeries.

When is the yeast cell active?

Moisture and carbohydrates jumpstart yeast, which reaches its highest activity levels at 35-40 °C (95-104°F) and is inactivated at 55°C (131°F). Yeast is most active in the proofer, and the first part of the baking process, which contributes to the bread’s oven spring.

What other kinds of yeast are there?

Baker’s and brewer’s yeast extracts fall into this category. Through a natural process involving heat and enzymatic reactions, the inside of the yeast cell is separated from the cell wall. These extracts consist of proteins, amino acids, carbohydrates, vitamins and minerals. They are used as natural flavoring systems to enhance savory and sweet notes. Baker’s and brewer’s yeast extracts also have strong characteristic savory and umami notes that can be used as building blocks for flavor development.

Find out more about Yeast Nutrients and their many uses and variations!