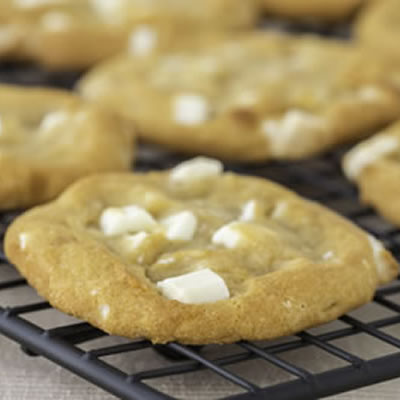 White chocolate is used in a variety of baked goods, including cookies.

What is White Chocolate?

White chocolate is made from the butter of cacao beans. After the beans are harvested, they are processed further into cocoa butter (the fat component), chocolate liquor (the liquid component that contains not less than 50% nor more than 60% by weight of cocoa fat), and cocoa solids (the nonfat part of the cacao bean).1 White chocolate is based on the cocoa butter portion, mixed with other ingredients.

White chocolate should be eaten sparingly as part of a healthy diet. It has few nutrients, and is also low in antioxidants, unlike dark chocolate. The majority of the calories in white chocolate come from sugar and fat, and this product typically contains high levels of saturated fat as well.

Besides cacao fat, these other ingredients may be found in it:2

The development of brown colors is one of the main problems that limit the shelf life of confectionery products manufactured with white chocolate or their substitutes. The brown tone is not from fat oxidation, but a result of non-enzymatic browning reactions. Controlling storage conditions and the permeability of packaging against water and gas vapors can delay browning.3