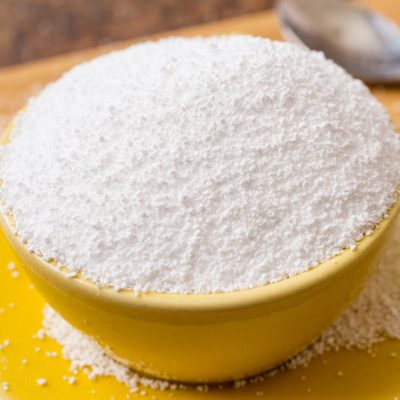 Sorbitol is a sugar substitute found in many baked goods.

Sorbitol is a sugar alcohol that is manufactured from the glucose produced from cornstarch. It is often used as a sugar substitute in candies, baked goods, syrups and beverages. Sorbitol is roughly 60% as sweet as sucrose and has approximately 2.6 calories per gram. 1 It also occurs naturally in some stone fruits and berries.

By the mid 1950s, sorbitol was being industrially manufactured and was approved for use by the Federal Drug Administration (FDA) in 1971.

The chemical structure of sorbitol.

Sorbitol appears as a white hygroscopic powder, as a crystalline powder or as flakes or granules. It is highly soluble in water and slightly soluble in ethanol. The standard preparation is to dissolve a weighed quantity of it in water to obtain a solution with a concentration of about 10.0 mg of per ml. 3

Sorbitol has two-thirds the calories of sugar and, as mentioned earlier, is less sweet. It is poorly absorbed by the body, so it does not raise insulin levels as much as sugar does; nor does it promote tooth decay.

Sorbitol is  a glucose molecule with two hydrogens added. The two extra hydrogens are on either side of what used to be the double bond connecting the oxygen to the carbon, which is now a single bond.

It is industrially manufactured by the catalytic hydrogenation of the glucose produced from cornstarch. 4 In addition to its use as an artificial sweetener, sorbitol is also used as a humectant in cosmetics and toiletries and as a liquid vehicle, stabilizer and sweetener in pharmaceuticals. 5

Sorbitol frequently comes in powder form and is used as a sweetener or moisture-stabilizing agent in the production of confectionery, baked goods and chocolate, among many other products. Its moisture-stabilizing action makes it a good choice for products that tend to become dry or harden, and it helps maintain freshness during storage. 6 Sorbitol can withstand high temperatures and it combines well with other food ingredients such as gelling agents, fats and sugars.

Sorbitol is certified as GRAS (generally recognized as safe) by the FDA. There are limits on the amount that can be used in food, and food containing an excess of 50 grams of sorbitol must be labeled with the statement: “Excess consumption may have a laxative effect.” For more information on the FDA guidelines for sorbitol use, please visit this FDA web page.

What Does Fair Trade Mean?