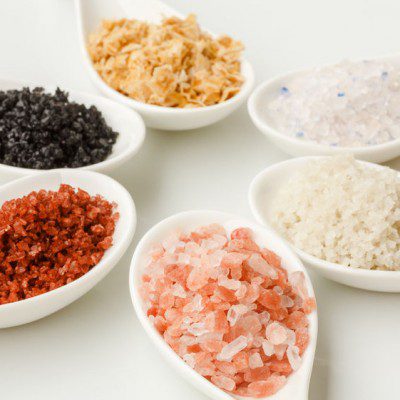 What is Sea Salt?

Sea salt is the salt obtained from the evaporation of ocean water. The practice has been utilized for thousands of years. It is one of the two primary ways to obtain salt, the other consisting of mining deposits found on land.

Sea salt is a natural product. It is directly obtained from evaporation of ocean water. It contains 98% sodium chloride and two percent other trace minerals.

Sea salt production primarily occurs in hot, dry atmospheres. While it is possible to make this ingredient via commercial equipment, such a process is much more energy and capital intensive. Thus, the Mediterranean region produces the majority of sea salt around the world. The salt is made by filling large pools with salt water and then letting them dry entirely. Debris sinks to the bottom of the pool, allowing the salt to come off the top with ease, yielding a more pure and simple harvest. The top salt derived from such a practice is a very expensive salt called fleur de sel.

Sea salt is used widely throughout the world and is seen as a superior grade salt in the United States. Chefs often use it to give their dishes more interesting colors, textures, and flavors. A large part of why the taste changes is because it has a slower dissolution rate.

Salt addition to baking strengthens the dough and enhances bread flavor. It can be used in most recipes that call for table salt. It also has uses in the cosmetic industry as an exfoliator. This salt is typically coarser than table salt. So, if using it in bread or candy, it is important to use the same weight, because volumetric measurements will not be the same. Also, a small amount of extra salt may need to be added if using sea salt.

In either case, it is vital to maintain a healthy lifestyle and not to over use salt. High sodium intake is directly associated with high blood pressure, which is a major risk for cardiovascular disease. Low sodium sea salt is available for baking. A commercial low sodium sea salt, which is comprised of 31-35% magnesium chloride (MgCl2), 21-26% potassium chloride (KCl) and 5% NaCl, can be used replace salt in bread making.1 Compared with salt, the low sodium sea salt doesn’t inhibit yeast fermentation. Its addition has no influence on bread volume.

Although both sea salt and salt addition could decrease dough extensibility, it is higher with the use of low sodium sea salt when compared with bread prepared with salt. Crust color becames darker with the increase of sea salt, most likely because of the presence of metal ions (potassium and magnesium) in sea salt. Overall, sea salt does not affect bread-making quality, but bread with 0.5% sea salt presented the best quality parameters when compared with 1.0% – 3.0%.1

The Dietary Guidelines recommend that the general population consume no more than 2,300 milligrams of sodium a day (about a teaspoon of table salt).2 Individuals with hypertension, blacks, and middle-aged and older adults should limit intake to 1,500 mg of sodium per day.2

Colored sea salt products containing added charcoal or red clay are sometimes referred to as “Hawaiian Sea Salt.” But charcoal and red clay are not listed for safe use by the FDA.3 Manufacturers of sea salt that intend to add color additives that are not currently approved for food use to their products, such as charcoal or red clay, must first obtain approval for the use of these substances through the color additive petition process.3

How To Find and Bake With a DATEM Replacement

How Society is Shaping Food Trends

Wondering How to Make a Successful Clean Label Product?

BAKED in Science S2E31: Baking with Natural Colors and Flavors

Organic Baking is Here to Stay!

An Organic, Non-thermal Kill Step for Seeds, Grains and Nuts