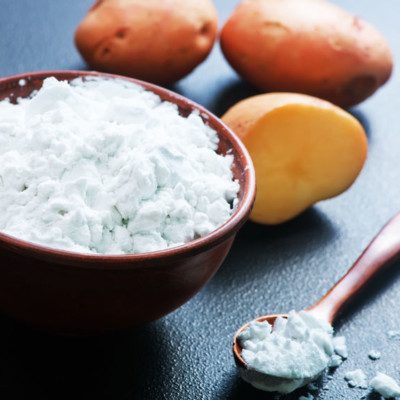 What is Potato Starch?

Potato starch is a fine, white powdery substance derived from potatoes. Similar to other starches, it is commonly used to thicken, gel, texturize and increase crispiness in baked goods. It is also used in clear soup, confections, fillings, and so on.

Properties such as high water-binding capacity, low gelatinization temperatures and tendency to form relatively clear, highly viscous pastes are some of the most beneficial aspects of using potato starch in food systems.

Potatoes originated in South America about 13,000 years ago, where the Incas cultivated and consumed it. During the conquest of Peru and Chile between (1525-1543), the Spaniards discovered potatoes and brought the crop back with them to Europe in the 1570s. A few decades later, European farmers began to produce starch from potatoes which they first used to starch linen. Further on, monarchies in Europe used it to powder their wigs and faces, a fashion trend at the time.1,2

The presence of phosphate groups on the amylopectin molecule makes it sensitive to electrolytes such as potassium and calcium. This may explain the challenges with potato starch  dissolution and gelatinization behavior in hard water.2,3

Potato starch is largely resistant to digestion in the small intestine. Since it is an uncooked resistant starch, it can be categorized as RS 2.4 It is gluten free.

Traditionally, potato starch is extracted from potato cultivars that are rich in starch, typically, 22%.2 The process consists of washing the potatoes, disintegrating them to break the cells open and release starch granules along with broken cell wall and other cell contents. Normally, sulphur dioxide is added to inactivate oxidative enzymes and prevent discoloration.

Disintegration can be done using hammer mills (U.S.) or rotary saw blade rasps (Europe). The macerated potato is forced against a screen through which starch and fibre are physically removed from the juice. The pulp is screened through a rotary sieve and concentrated using a continuous centrifugal separator where fiber and extraneous matter are removed.

In potato and other starches, gelatinization of amylose results in crystals which can reduce the paste clarity. Chemical treatment can help overcome this problem although this process is expensive and often inefficient. In 2005, a new, non-GMO potato variety was introduced. More recently, CRISPR CAS9 technology and tilling have also been used to develop amylopectin-rich potato starch.2

Similar to other starches, potato starch can be modified via degradation or cross-linking to improve its functionality.

Potato starch is preferred over corn starch and other starches in many applications due to the following properties:

The FDA identifies starch as that from corn and mandates that if it comes from any other source, must be labelled accordingly. It also strictly regulates modified starches (specific requirements can be found here).