What is a Pentosan?

Pentosan is any polysaccharide composed of five carbon sugars called pentoses. They are found in grains, fruits, and legumes. Pentosans are used in the baking industry to increase water holding capacity of the flour in effect slowing down the rate of time it takes the bread to go stale.

It has the general formula (C5H8O4)n. Upon hydrolysis, the only resulting monosaccharide is pentose. Examples of pentosans are xylan and arabinoxylan (AX). Pentosan in cereal is AX. Figure 1 is the structure example of arabinoxylan.

Pentosans are naturally found in the cellulose of plants and in humus. 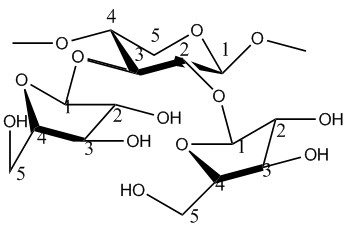 Pentosan has a significant effect on wheat functionality.

WEP forms highly viscous solutions when dissolved in water. The solution viscosity is quite high when compared with those of other non-starch polysaccharides such as gum Arabic, dextran or pullulan.3 WEP increases the viscosity of the dough aqueous phase, therefore, increasing the stability of the liquid films and dough foam structure. The increased stability can prolong oven rise and prevent early coalescence of gas cells. This results in higher loaf volume and a finer homogeneous breadcrumb. It is also possible that WEP, because of its high molecular weight, forms a secondary, weaker network enforcing the gluten network.3

In contrast to WEP, WUP destabilizes the dough structure. It is present in the discrete cell wall fragments that can form physical barriers for the gluten network during dough development. During fermentation, it can form intrusions in the gas cells. It also absorbs a large amount of water, which is consequently not available for gluten development and film formation. WUP has strong tendency to absorb water and swell, being reported to be able to hold 6 to 10 times its weight in water.3 As such, it lowers the stability of the gluten network. Lower loaf volumes with coarser crumb and higher initial crumb firmness are obtained.3

Both WEP and WUP can retard the staling rate of bread due to their high water holding capacity.4

Pentosans are often added in breadmaking as natural improvers, dietary fiber fortification, or for economic benefits. The source, quality and amount of pentosans to add are important for bread quality enhancement. Research shows when WEP and WUP from wheat and WEP from rye are added in concentrations of  0.5%, 1.0%, 1.5% and 2.0% to flour samples,5 all three pentosans markedly increased the water absorption and loaf volume, and retarded bread staling. The structure of WUP may be modified during the extraction process. In other studies, 0.8% AX was added to wheat bread flour, with 2.5% flour removal. The AX fortified bread maintained similar weight, volume, height and firmness as standard white bread.6

To solve the problem caused by WUP, endoxylanases with a specificity towards water unextractable arabinoxylan (WU-AX) can be used. They catalyse the conversion of detrimental WU-AX to high molecular weight enzyme-solubilised AX with beneficial functionality in bread-making. Enzyme dosage is important. Optimal dosage could improve bread loaf volume, crumb structure and crumb softness, increase fermentation stability and resistance to mechanical stress and oven rise.3 Yet extensive dosage  leads to extensive degradation of WU-AX. This leads to the decrease in water holding capacity of dough. Slack doughs and dough stickiness after mixing may occur.3