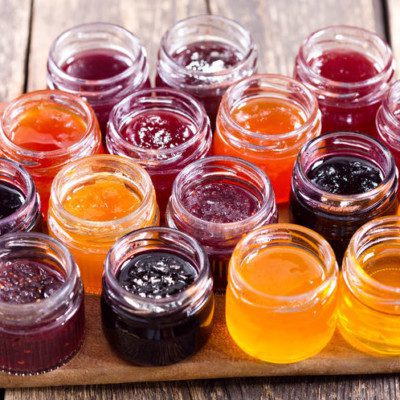 Pectin is a substance found in plant cell walls that is commonly used as a food ingredient. It helps foods gel and stabilize. In baking, pectin is a polysaccharide that is used as a fat and/or sugar replacer to create lower calorie foods and bakery jams.

Pectin is found in many types of plants, but these lack the ability to gel acid sugar, which is the primary reaction needed for a successful commercial product.

Pectins were first studied in 1825. Early commercial jam makers in Germany needing to preserve fruits in season, such as strawberries, did not have apples available to use and began drying pomace specifically for its gelling properties. They created an extract for commercial use.1

Pectin has been traditionally derived from apple peels and cores. Eventually, the liquid extracted from the fruit pomace was combined with the preservative sulfur dioxide for bulk sales. With the growth of its use in commercial food production, citrus peels were used, typically oranges. Thus, industrial users had a more stable, solid ingredient.

Between the 1940s and 1950s, sugar beet pulp temporarily replaced apple as a pectin source. Other types of citrus used to create food-grade pectin have included lemon and lime as well as grapefruit.

The industry developed such that not only were formulas standardized, but also some manufacturers developed specific formulations for individual commercial customer use.2  Today, the quality of available fruits varies and “there is competition to obtain peel with the best pectin quality,” according to Thickening and Gelling Agents for Food. In addition to sugar beet pulp, experiments were made with using sunflower heads as a source, but the product is not ideal and there are limited amounts of sunflower pectin available.1

Pectin helps food ingredients gel, thicken, and also acts as a stabilizer.3 It is a hydrocolloid, a category of ingredients that includes gelatins and alginates.

As a food ingredient, it can be used across a wide range of baked goods. This includes within an ingredient known as bakery jams. These are used to enhance pastries such as cookies, cakes, filled doughnuts, and Danishes. They may also be used in nutrition bars.4

More recently, food scientists delved into the molecular structure, specifically the structures of pectic polymers and pectinolytic enzymes. Such explorations are leading to the development of designer pectins with specific functions.5 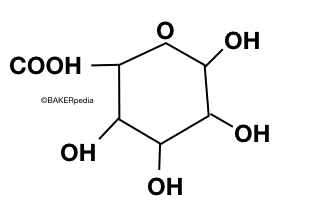 Pectin is most commonly used as a gelling agent. Beyond its use as an ingredient in various jams and jellies as well as preserves, it is also used in cold-setting flans, confectionery, ice creams, puddings and pudding-based desserts, in glazes, flavor emulsions, and whipping creams.6

Two pectins are commonly used in food production: high-methoxyl (HM) and low-methoxyl (LM) pectin. These are “largely interchangeable in a food formula,” writes A.C. Hoefler in The Chemistry and Technology of Pectin.

When substituting an LM for an HM pectin, 10 percent more pectin is needed to achieve a similar firmness level. Issues such as moisture can also influence choice. For a jelly-filled doughnut, for example, the jelly is encased by the dough. The texture and flavor of the dough needs to remain separate from that of the jelly. Thus, LM pectin is ideal.

Pectin is soluble in cold water. It is available as a powder or a liquid. When using powder, it must be quickly and thoroughly dispersed into the liquid to prevent the formation of gel-encased lumps that will mar the final product. Thus, the ideal means to use it is to blend or combine it with other soluble powders before adding these to the liquids.

Food-based pectins are generally recognized as safe by the United States Food and Drug Administration when used as emulsifiers, stabilizers, or thickeners in conjunction with current good manufacturing practice.7 Six different pectin-related enzymatic compounds have been evaluated by the agency since 1999. However, “The agency has not, however, made its own determination regarding the GRAS status of the subject use of these enzyme preparations.”8, 9