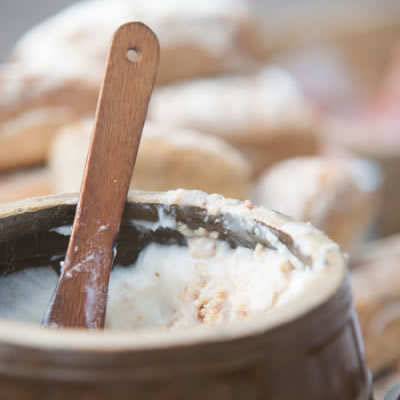 Lard is a white, soft fat obtained from pigs. It has a distinctive flavor and unique crystal structure which enhances flakiness in pie crusts. Its high smoke point makes it popular for frying and cooking applications.1

Similar to other fats, lard is a triglyceride with various fatty acids make-up depending on the diet of the hog. It is commercially available in several forms, mainly:

Lard has been cooked with since prehistoric times.2 It is a staple fat in British, Latin and Asian cuisine. The 1970s witnessed a decline in lard usage in baking and frying in the United States due to increased health concerns about saturated fats and heart disease. Also, due to religious dietary restrictions such as Halal and Kashrut. Today, it is still popular in British, Central European, Chinese and Mexican cuisines.1

There are three main sources of lard:

Lard serves several functions in baking such as:

As a high saturated fat, consumption of this food has been associated with high blood pressure and coronary heart disease. However, it has less saturated fat than the same amount of butter by weight.1,3

Rendered fat can be obtained through two processes:

After rendering it can go through other refining processes, such as:

Lard use has decreased through the ages and has been substituted by vegetable shortening. However, many cooking and baking non-commercial applications still call for lard usage due to its unique flavor and crystal structure such as:

Some considerations when baking with lard:

Lard is considered by the FDA as a Partially Hydrogenated Oil (PHO’s) for the analysis of its status as a Generally Recognized As Safe (GRAS) food product. Since 2015, PHO’s are no longer recognized as safe by the FDA, and can’t be used as  ingredients in food products.6