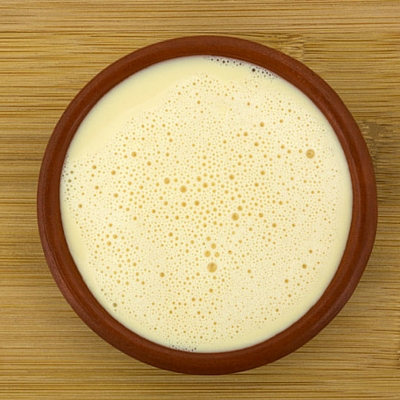 What is Evaporated Milk?

Evaporated milk is a condensed version of fresh milk, popular for its extended shelf life.1 In canned form, evaporated milk can last unrefrigerated for up to 15 months. The water content has been removed, so that it is concentrated up to one half of its original bulk. Evaporated milk is rarely bought for drinking. However, it is an easy substitute for fresh milk in baked products that does not sacrifice taste.

Milk is put in a high pressure vacuum and heated to evaporate the water. Unlike regular milk processing, no sugar is added during the sterilization and homogenizing process. However, vitamin D is added under FDA regulations. Salt is also used as a stabilizing agent. The milk is then canned and sealed.

A variation of evaporated milk is sweetened condensed milk, which has added sugar. A much sweeter and richer product, condensed milk has a longer shelf life and is often used in ice cream or candy manufacturing.2

The idea for evaporated milk was born as a solution for transporting milk in the 1850s. During that time, bacteria made drinking and shipping milk a risky business. Gail Borden, a dairy farmer, considered this problem while accompanying his milk cows on a ship from London to the United States. The cows became seasick, so they could not be milked to feed hungry infant passengers. Once home, Borden began testing ways to process and package milk to endure long journeys. After discovering milk was over 80 percent water, Borden boiled the water off the top to create evaporated milk. After further tests, obtaining a patent, and teaming up with grocery wholesale owner Jeremiah Milbank, the first Eagle Brand Consolidated Milk production plant was opened in 1864.

Evaporated milk was not an instant success. Consumers had a hard time getting used to the taste and it was blamed for an outbreak of rickets in 1905, due to its lack of nutrients. However, the Union Army purchased evaporated milk in 1861 for rations, which helped boost the product’s popularity. Today, under two percent of all U.S. milk production is evaporated or condensed.

Evaporated milk is easy to incorporate into almost any recipe and product. It can be purchased in low-fat and fat free options. Bakers often use it as a substitute for cream to help reduce fat content.

To substitute for a cup of regular milk, add in one part evaporated milk and one part water. For a more fresh-milk taste, add half the called for milk with evaporated milk, and the rest with water. Cream can also be used to even out the evaporated milk instead of water. Evaporated milk is stored at room temperature, and it is advised against freezing it.