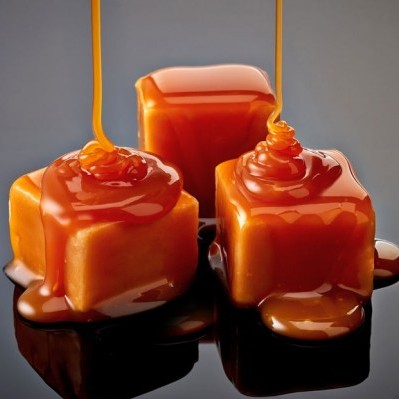 Butterscotch is commonly in hard candy, syrup or flavoring form.

Butterscotch is a kind of confectionery. The primary ingredients are brown sugar and butter. Some recipes will include vanilla, syrup (particularly for butterscotch sauces), cream, salt, and even lemon.

Butterscotch is claimed to have been first named in 1817 in Doncaster, England by Samuel Parkinson. He had begun making the candy earlier under the name of buttery brittle toffee. The company that produced the candy received the Royal Seal of Approval for their highly demanded export. Though it is considered merely a flavor today, butterscotch was historically a hard candy created with brown sugar and butter. Some recipes will include vanilla, syrup (particularly for sauces), cream, salt, and even lemon. The coveted original recipe was discovered in 2003 by a businessman in Doncaster (the original company stopped production in 1977) and is still being used today by particular businesses.1

The suffix “scotch” means “to cut”. When sugar or candy is hot it’s difficult to get a clean break, so one must score it while warm to facilitate getting a clean edge later.2

Today butterscotch is considered a flavor, much like caramel. Made famous at soda fountains by accompanying banana splits, butterscotch sauce has been an American favorite since the 1950’s.2

The nutrition in the butterscotch candy includes: 8% fat, 92% carbohydrates, and 0% protein. There are 23 calories in 1 piece of butterscotch hard candy. Calories from fat are 2.3