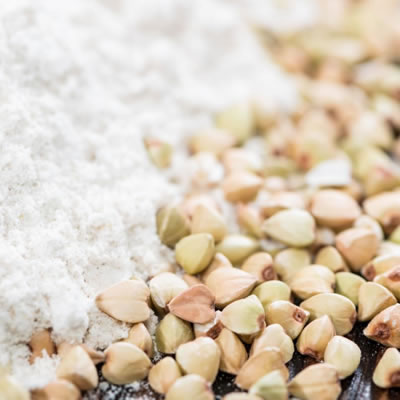 What is Buckwheat Flour?

Buckwheat flour is a free-flowing white to gray powder with black speckles. It has good nutritional value and a unique taste which adds complexity to baked products.

Traditionally, it’s used in pancakes, noodles and unleavened breads in Asia, Eastern Europe and United States. It is gluten free, has a sweet aroma and the flavor is nutty, earthy, bitter and intense.1 Buckwheat flour is best in combination with other flours and despite its name, has no relation to wheat.

Buckwheat is not a cereal, but a seed that resembles a cereal grain in starch content and composition. Some say it is a “pseudocereal” but it actually belongs to the Polygonaceae flowering plant family just like the rhubarb plant.

It has origin in Western China and came to Europe in the Middle ages. Eventually, it made its way to  North America by immigrants.2 The plant does well in areas of high elevation with a short frost-free period. It is an annual plant that has a short growing season (2-4 months) and therefore can function as a second crop. Buckwheat is sustainable because of the short growing season and its tolerance to poor quality, sandy or acidic soil.3

Buckwheat flour adds diversity of texture, taste and appearance to food products. Many people know and love the food it is found in: pancakes, Japanese Soba noodles and Galettes (crepes).

Buckwheat flour is a nutritional powerhouse in comparison to rice and maize, the grains traditionally used in gluten free products. The flour is rich in minerals, antioxidants, and has a well balanced amino acids profile. There is a higher amount of fat in buckwheat flour, but it is primarily unsaturated fat, oleic and linoleic acid.

There are two cultivated species of Buckwheat, common and tartary. Common buckwheat is  the plant found in food products world-wide, while tartary buckwheat is found in the Himalayan region of the world.7

Buckwheat is grown in every country producing major cereal grains.4 The most common method of processing buckwheat is milling the seed into a flour. From the flour and milled fractions, a variety of food products can be made.

At this time, however, it is not a flour extensively in developed, industrialized nations. In fact, most of Canada’s crop is exported, but there is interest in using this nutritional powerhouse in more foods.

Besides gluten free applications, buckwheat flour enhances the nutritional properties of bread when it partially replaces wheat flour. Since the composition and absorption properties of these flours differs, more water and mixing time is necessary in recipes where buckwheat is used. The threshold of substitution for buckwheat flour in bread is 30%.8