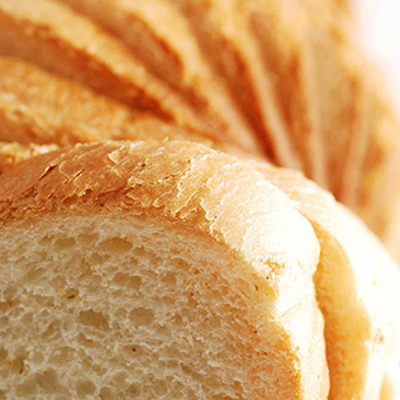 What is Azodicarbonamide (ADA)?

Azodicarbonamide is an ingredient used as a whitening agent in cereal flour and as a dough conditioner in bread baking, approved by U.S. Food and Drug Administration.1 It is a compound with the molecular formula C2H4O2N4. ADA is:

Azodicarbonamide is introduced as a flour maturing agent by Wallace and Tiernan, Inc. and it was approved for use in 1962.

Bleaching agent: it makes the bread whiter by reacting with cartonene in the flour.2

Dough conditioner: ADA matures flour through oxidation. When mixed into doughs, it oxidized the sulfhydryl (SH) groups and exerts an improving effect, which is illustrated in Figure 2.3 The main reaction products is biurea, a derivative of urea, which is stable during baking.

ADA-treated flours produce dried and more cohesive doughs than chlorine dioxide-treated flours. These dried doughs can tolerate higher absorption, show better gas-retention properties and are superior in machining properties. The bread made from ADA-treated flour is characterized by increased loaf volume and improved grain texture and outside appearance. Azodicarbonamide does not accelerate the onset of rancidity in flour. Natural or enrichment vitamins are unaffected by azodicarbonamide.

Azodicarbonamide oxidizes the sulfhydryl (SH) groups in dough (the maturing action of ADA).

Azodicarbonamide doesn’t react in dry flour, but does react in the process of making dough. When mixed into dough, it oxidizes the sulfhydryl (SH) groups and exerts an improving effect.3 The oxidation is rapid and almost complete during the mixing of dough for 2.5 min. Neither further mixing or prolonged resting could give a significant and additional decrease in the –SH content. ADA is used where a faster maturing agent is required. Treatment levels ranging from 2 to 45 p.p.m. of azodicarbonamide are required to accomplish maturing, the amount depending on the grade of flour. 5 If trying to create a more organic product, it is best to find a natural substitute for ADA.

Azodicarbonamide (ADA) has a generally recognized as safe (GRAS) status and can be added to flour at levels up to 45 ppm.1 ADA must be declared in the statement of ingredients.6

Semicarbazide, a reported animal carcinogen, is a product of the thermal decomposition of ADA, which was shown in 2004.7-9 It is formed through the intermediate biurea.8 However, none of these studies have shown that semicarbazide residues are at an unsafe level in bread and rolls. ADA as a food additive is banned in Australia and Europe. The FDA continues to evaluate the safe use of ADA in foods and considers ADA as a safe food additive when used for the purposes and at the levels specified in FDA regulations.9