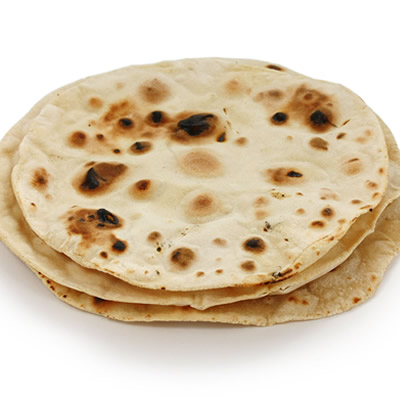 Atta is a type of whole meal flour, or pulverized whole wheat, that is used in Indian chapati, puri, phulka, tandoori roti, and north Indian parotta.1 Brown in color, it is derived from the complete wheat kernel with bran.

Atta has gluten, that provides possessing and extensibility properties. It’s the gluten in the atta that helps in the rolling of chapathis.

Atta is from India. The word ‘whole’ is used to describe atta as it includes every aspect of the grain, meaning the bran, germ and the endosperm. In India, about 80% of the 94 million tons of wheat produced is processed mainly into atta by disc mills numbering 4 lakhs.

In India, Atta is obtained by grinding wheat in a plate/disc mill. The mill consists of two chilled-case corrugated iron plates placed vertically. One of the plates is stationary, while other rotates. The wheat entering from the hopper is ground between the plates due to shearing action as well as the friction. Grinding of wheat in disc mills is very severe when compared to roller flour milling, hence the damaged starch content present in atta (14-18 %) is more than wheat flour (8-10%).

The atta with damaged starch in the range of 14 – 16 % is considered to be most suited as it absorbs more water and hence produces softer chapathi2. During the grinding of wheat  in disc mills the friction increases the temperature of atta  up to 95oC.  It is reported that at such high temperatures, the carotenes present in the bran tend to exude the characteristic roasty smell, and contribute to the sweetness of the atta3.

Atta has better nutritional characteristics than wheat flour as it contains higher amount of protein, dietary fiber, vitamins and minerals. But has comparatively poor shelf life due to the presence of oil from the germ and fat breaking enzymes.

For chapathi, the atta is mixed with water to form a dough. This dough is then sheeted to a circular shape, baked on a hot plate and puffed over an open fire for few seconds. Complete and full puffing is one of the important quality attributes of chapathi as it results in a soft and pliable texture.

Among the different species, Triticum  aestivum which yields a non sticky dough with good stretchability, and a fully puffed chapathi with soft and pliable texture, is most suitable for chapathi preparation. When the species  T. durum and T. dicoccum are used for chapathi making, a leathery and chewy texture is obtained, which may then be perceived as a dry chapathi.