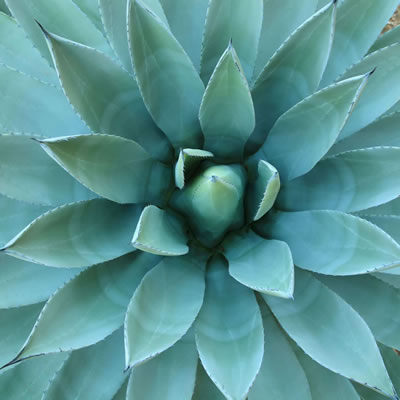 Agave nectar is an alternative sweetener to sugar or honey, with vegan and low-glycemic characteristics.

Agave nectar (or agave syrup) is a natural sweetener generally used as a sugar substitute in baking or cooking. It is obtained from several different species of the agave plant and most commonly known as the origin of tequila and mezcal.

The Aztecs prized the agave plant as a gift from the gods. They used its sweetness in most of their foods and beverages, calling it “honey water.” Most agave nectar today originates from Mexico and South Africa.

Agave nectar can be obtained from several species of the agave plant. The species of plant used to produce agave nectar determines the processing technique and yields varying compositions of the product.

For example, agave nectar produced from the Agave tequilana plants starts by cutting the leaves off of the matured plant and obtaining the syrup by grinding it with hot water.  The syrup is then filtered, heated and concentrated. This agave nectar once processed is mainly composed of fructose and fructooligosaccharides.

Producing agave nectar from the Agave salmiana plant starts by cutting off the stalk of a young plant. In the centre of the stalk, a hole is formed and the sap of the plant fills the core. Once enough sap is collected, it is filtered and processed with heat to produce this agave nectar mainly composed of sucrose.1,2

Overall, the main composition of Agave nectar is fructose, glucose and carbohydrates3, giving it a  sweet taste.

Agave nectar can be substituted in formulas for sugar or honey, and it’s often a popular choice for vegan consumers who choose agave nectar over honey.

Agave nectar is produced as a light, medium, or dark colored syrup, depending on its final use. The darker syrup has a stronger, more caramelized taste and is often used “straight out of the bottle” as syrup topping for pancakes or waffles. The darker syrup is also preferred for beverages.

Because agave nectar is a low glycemic index food (a 30 on the index) it is also preferred for its health benefits over sugar and artificial sweeteners. It is also 1.5 times sweeter than sugar, which means a smaller amount is needed.

Agave nectar comes in a various colours and is thinner in consistency than honey. It is favourable for sweetening cold beverages as it dissolves quickly.4

Because agave nectar is 1.5 times sweeter than sugar, less of it is required for recipes. For sweetening, substitute ¾ cup agave nectar for 1 cup sugar.

When using agave nectar as a sugar substitute for one cup of sugar in baking, the following adjustments are recommended:

GRAS Notice No. 582 and No. 687 indicates Agave inulin from Agave tequilana is generally recognized as safe (GRAS) when used “to serve as a bulking agent or source of reduced energy carbohydrate.”5

What Does Fair Trade Mean?

How Will the FDA’s Added Sugar Regulation Affect Your Bakery?