Enzymes and the Fascinating World Alive in a Cell

Enzymes play a key role in dough and the finished product.

Ever wondered how a couple grams of lipase, hemi-cellulase or amylase enzymes in 500 lbs of dough impact bread properties so much?  What’s more, the amylases used to extend bread freshness in breads have only a few minutes to modify the starch during its gelatinization phase in the oven. The impact though is softer breads with extended freshness.

One can only conclude enzymes must be acting again and again at a mind boggling speed. To imagine what goes on, let’s look at cells, the building blocks of every living organism. They are packed with thousands of components, enzymes being one of them. Modern-day bakery enzymes are obtained from living cells.

But what is really going on? Bill Bryson in his engaging, easy-reading science book “A Short History of Nearly Everything” has an entertaining chapter on cells. Some of the paragraphs of the life in a cell will give you a taste of this incredible world of enzymes. Enjoy!

From the Enzyme chapter in “A Short History of Nearly Everything:”

Every cell in nature is a thing of wonder.  Even the simplest are far beyond the limits of human ingenuity.  To build the most basic yeast cell for example, you would have to miniaturize about the same number of components as are found in a Boeing 777 jetliner and fit them into a sphere just five microns across; then somehow you would have to persuade that sphere to reproduce.

The cell has been compared to many things, from “a complex chemical refinery” (by the physicist James Trefil) to “a vast, teeming metropolis”.

Whatever their size or shape, nearly all your cells are built to fundamentally the same plan: they have an outer casing or membrane, a nucleus wherein resides the necessary genetic information to keep you going and a busy space between the two called the cytoplasm.

If you could visit a cell, you wouldn’t like it.  Blown up to a scale at which atoms were about the size of peas, a cell itself would be a sphere roughly half a mile across, and supported by a complex framework of girders called the cytoskeleton.  Within it, millions upon millions of objects – some the size of basketballs, others the size of cars – would whiz about like bullets.  There wouldn’t be a place you could stand without being pummeled and ripped thousands of times every second from every direction.

The proteins are especially lively, spinning, pulsating, and flying into each other up to a billion times a second. Typically a cell will contain some 20,000 different types of protein.  Enzymes, themselves a type of protein, dash everywhere, performing up to a thousand tasks a second.  Like greatly speeded up worker ants, they busily build and rebuild molecules, hauling a piece off this one, adding a piece to that one. 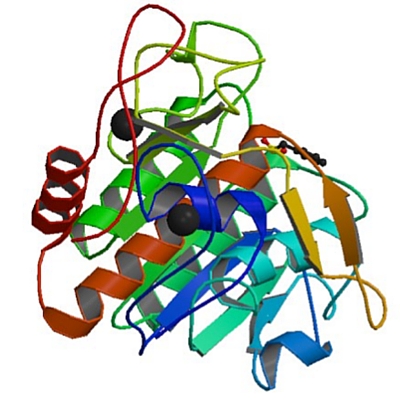 The molecular world must necessarily remain entirely beyond the powers of our imagination owing to the incredible speed with which things happen in it.   But slow things down, to a speed at which the interactions can be observed, and things don’t seem quite so unnerving.

The total is still a very minimum of 100 million protein molecules in each cell.  Such a staggering figure gives some idea of the swarming immensity of biochemical activity within us.

What is perhaps most remarkable is that it is all just random frantic action, a sequence of endless encounters directed by nothing more than elemental rules of attraction and repulsion.  There is clearly no thinking presence behind any of the actions of the cells.  It all just happens, smoothly and repeatedly and so reliably that seldom are we even conscious of it, yet somehow all this produces not just order within the cell but a perfect harmony right across the organism.  In ways that we have barely begun to understand, trillions upon trillions of reflexive chemical reactions add up to a mobile, thinking, decision-making you – or, come to that, a rather less reflective but still incredibly organized dung beetle.  Every living thing, never forget, is a wonder of atomic engineering.

About the Author: Frank Devos

Frank Devos, VP of R&D, Puratos Frank Devos has a master's degree in food science and technology with more than 20 years of experience in researching and developing ingredient solutions for the baking industry. For most of his career he has worked for Puratos traveling around the globe to support R&D projects with customers. His main areas of competence are texture optimization, trouble-shooting and ingredient functionalities in relation to various production processes. Originally from Belgium, he spent his last 5 years as Vice President of R&D for Puratos Corporation, based near Philadelphia where he coordinates the activities of the different R&D teams and the Innovation Center.