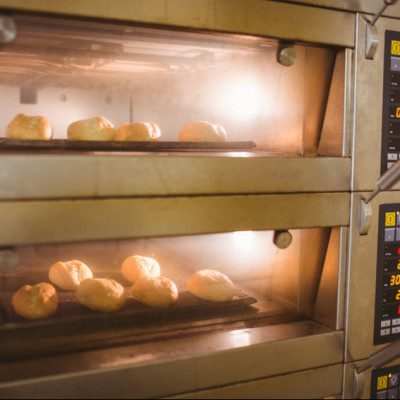 Advanced Glycation End-Products (AGE) could be a concern for baking.

High heat is commonly used for food preparation when frying, roasting and baking. South Asians (including residents of Pakistan, India, Bangladesh, Bhutan, Maldives and Sri Lanka) use frying as a food preparation method more often than other countries. There is a phenomenon that these areas have a four times greater risk of heart disease than the general population.1 This phenomenon leads to the hypothesis that a positive connection exists between high-heat food preparation and susceptibility to coronary heart disease (CHD).2

TFAs are one kind of fatty acid. They are formed during the partial hydrogenation of vegetable oils and in small amounts during refining of vegetable oils. Additionally, significant amounts of TFAs are also present when oil/fats are reused.

TFA consumption is associated with CHD in humans. TFAs increase low density lipoprotein (LDL), commonly referred to as “bad” cholesterol, while decreasing high density lipoprotein (HDL), and therefore, increase the risk of heart disease. Approximately 5 g/d of TFA is associated with a 23% increase in the risk for CHD.2 FDA began requiring that trans fat be listed on the Nutrition Facts label in January 2006.3 Companies can make the claim of “0 grams of trans fat” if the food contains less than 0.5 grams of trans fat per serving.3 World Health Organization recommends TFA consumption as < 1% of daily energy intake.2

At this time,there is no direct research to support  that the high heat preparation hypothesis NFC formation is directly proportional to heat treatment during food processing, and the NFCs can lead to CHD. CHD researchers suggest reducing NFCs in food by following these methods: lower cooking temperatures,2 avoid snacks that are cooked in high-temperature oils,1 and try not to boil oils.