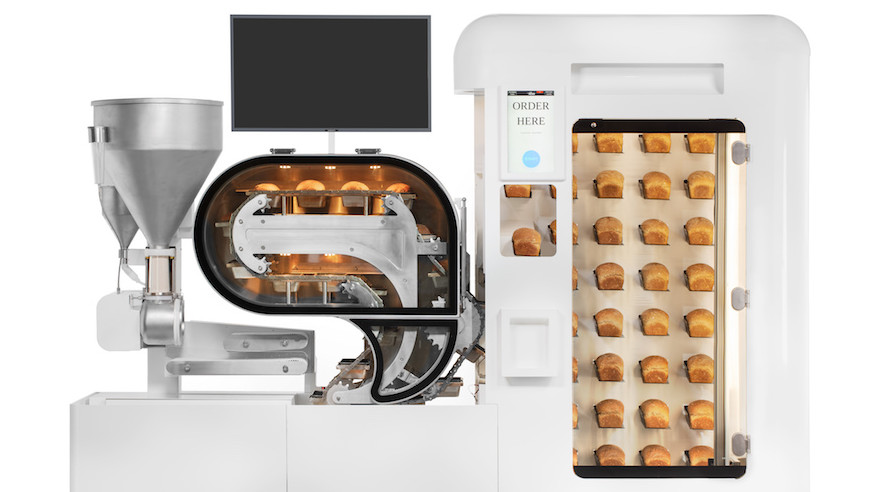 The baking industry is looking for ways to incorporate the latest technology into favorite products, so customers can get familiar foods fresher, easier and simpler—the blend of tradition and innovation.

So a bread-baking robot set up in the middle of store floors could check a lot of boxes for consumers and bakers. Have you heard about the BreadBot by the Wilkinson Baking Company?

This mini bakery is a fully automated bread maker that churns out 10 loaves an hour. It mixes, forms, proofs, bakes, and cools bread all on its own—right in the middle of the store!

The BreadBot is placed so customers can see, smell, and interact with their bread. Then, they can purchase a cooled and sliced loaf an hour after it’s been baked, or pick up an unsliced loaf minutes after it has exited the oven with the self-serve option. The whole unit is sized 120″ x 30″, and designed for the transparency of the bread making process.

The BreadBot has a production schedule set by the store and makes bread throughout the day. The individual stores anticipate the volume of bread to be sold and the time of day that they want more/less bread to be coming out of the oven.

As the shopper comes to the unit, they’re able to call a loaf to the dispensing window from a cooling rack without having to wait for it to be produced. They’re able to request the warmest loaf, just out of the oven, or one that’s cooled. They can slice on the store’s automatic self-slicing unit placed near the BreadBot.

Can the customer select raw materials for the bread?

Not yet. However, Wilkinson Baking Company anticipates a “version 2.0” that does exactly that. The hopes are that a shopper could order before coming to the store, picking things like 40% more sunflower seeds or half the salt. They could also pick what time they want their bread ready, then show a QR code to the BreadBot when they arrive and it would retrieve the loaf for them.

For now, though, the bread is dependent on what mix is placed in the hopper. There are a variety of breads that can be baked. Almost any type of dough-based bread can be made, although high sugar/sticky contents are avoided for purposes of equipment cleaning and support.

Where can I find one?

The BreadBot launched within the Stop & Shop supermarket chain (a unit of Ahold Delhaize) in the Boston area in September, 2019 as part of a pilot test before wider adoption.

Beta testing has also been done in three different supermarkets in the U.S. Northwest, with varying lengths of time, and the reception has been positive. The longest running test unit has been in one store for two and a half years. While there, the first month or so showed a ‘newness factor’, but from the second month onward, there has been a remarkable steadiness to purchasing behavior.

Is there anything else like this on the market?

Currently, there is no other commercial automated bread-making unit that makes bread from scratch like the BreadBot. In France, there is some similar equipment that finish a par-baked unit into a fully baked one. However, the BreadBot is more focused on the entire bread baking process.