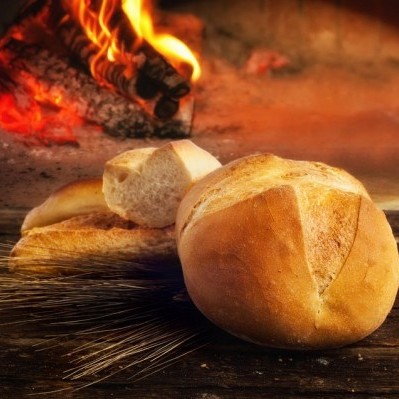 Hearth bread is traditionally baked in front of an open wood fire.

What is Hearth Bread?

Hearth bread is the term used to describe the traditional baking method where a fermented dough piece is baked on the floor of an often wood-fired oven. It is still widely used in small bakeries around the world, with an almost limitless range of local shapes and styles of bread. Hearth bread should have a distinctive appearance, taste, and aroma with an open and coarse texture.1

The name of the bread is thought to have originated from when people cooked on a hearth. These hearths took the form of clay-covered hollows in the floor which were heated with burning wood. When the heat was sufficient, the embers were raked out and the pieces of dough were placed in the hollows and covered over.2

Hearth bread is baked without the support of a pan. Dough expands both vertically and horizontally during proofing. The dough must retain a proper shape and volume after proofing and baking. Hearth bread has two characteristics: the form ratio (height/width) and slice area, which is an indicator of loaf volume.The following parameters have been studied to enhance the form ratio and loaf volume of hearth bread:

Other ingredients
Ascorbic acid and diacetyl tartaric acid ester of monoglycerides (DATEM) strengthen dough and improved hearth bread characteristics. One theory about the mechanisms of ascorbic acid on gluten is that ascorbic acid hinders the disulfide to sulfide (PSSP to PSH) interchange caused by glutathione and thereby strengthens the dough after resting time. Another theory is that ascorbic acid promotes the cross-linking of glutenin subunits through tyrosine.4 DATEM is an anionic oil-in-water emulsifier. It has been shown to increase the resistance and decrease the extensibility of doughs. One theory about the mechanism of DATEM on wheat dough is that DATEM facilitates the interaction of total and added lipids with proteins and starch, thus improving the gas-retaining capacity and increasing the loaf volume.4 However, the addition of DATEM to dough could not mask differences in protein quality between the different flour blends.3